A Hike To Remember: Chenini Tunisia

A Hike To Remember: Chenini Tunisia

At 9:00 a.m., my new friend Abdu Rahman saddled up the village donkey with all the essentials for our 10 km hike from Chenini to Douiret. This was the first time I was staying long enough in the Berber village to really experience life there.

I was with a group of 9 travelers on a cultural tour in Tunisia’s south. The day’s program was a hike from Chenini through the hills to the abandoned Berber village of Douiret, with a stop along the way for lunch cooked over an open fire! I really enjoy hiking and had heard great things about this particular hike. But I was unsure of what to expect in a country where nature experiences are still in the development stage. 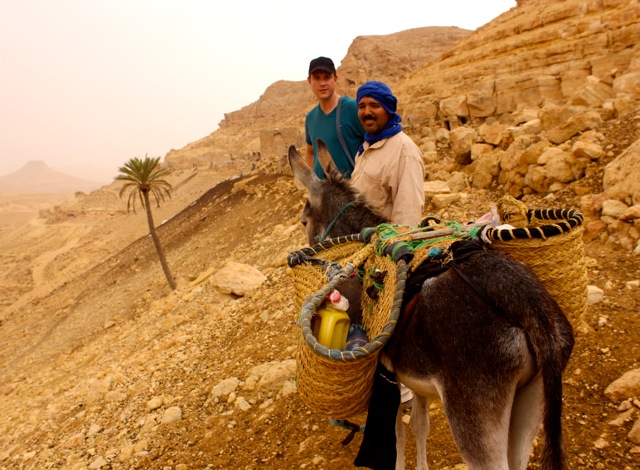 A Hike To Remember: Descending from Chenini

As we descended the hilltop of Chenini with Abdu Rahman and Aghyul (the Berber name for donkey), I was struck by the surreal landscape – rocky brown hills with palm, fig, and olives trees dotting the landscape here and there. Although the landscape is barren in Tunisia’s south, there’s something exotic and charming about it.

As we left the village, Abdu Rahman pointed out some of the Berber architecture. The local Berbers are known as “cave dwellers” because they build their homes in the side of the mountain. The front door looks like a cave entrance, and rooms inside are built in different shapes and sizes according to the strata of the mountain. Abdu Rahman’s father and uncle are among the few who still know how to build the traditional homes, so their work for new building projects is in demand! 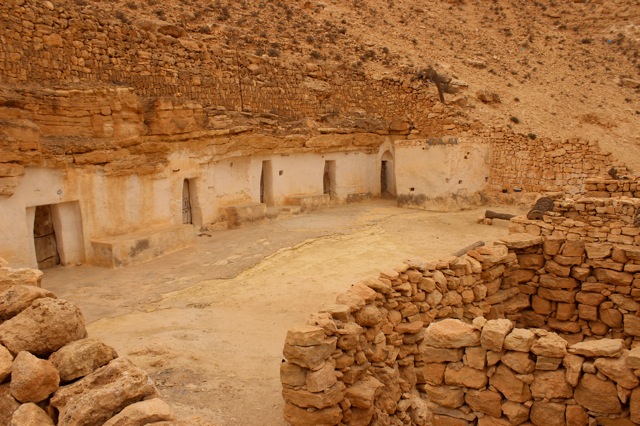 A Hike To Remember: Mosque of the 7 Sleepers

Further down the path, we stopped at the Mosque of the 7 Sleepers. This legendary mosque is believed to be the site mentioned in the Koran of several people who slept over a period of 300 years. At the mosque, there are unusually large tombs of 4 meters long in the courtyard. Legend has it that the sleepers grew to giant size when they were asleep. Nobody really knows the story of these tombs, but the place gave me a sense of the ancient history of the Berbers in this part of Tunisia. 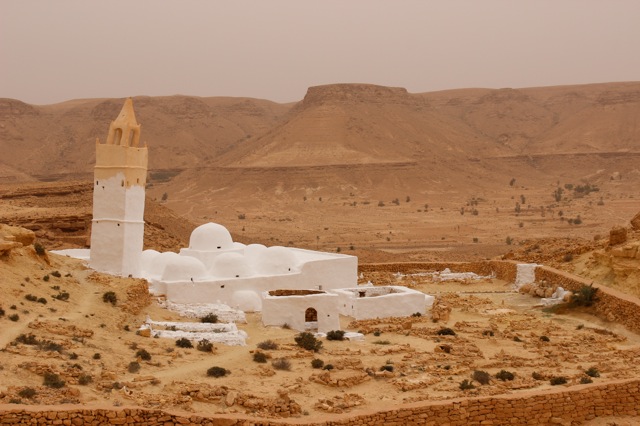 We continued on a stretch of flat land, and Abdu Rahman explained some of the farming methods the Berbers have used for hundreds of years. The methods have allowed them to live in an area that gets less than 5 inches (12.7 cm) of annual rain. The small plots of land are built so that all the rain is captured and fed to a very small number of date, olive, or fig trees. The olives are used to make oil, while the dates and figs are dried and stored for food throughout the year. 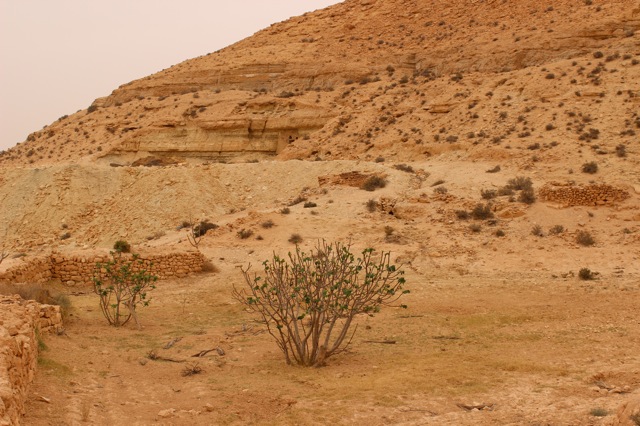 A Hike To Remember: Tunisian Tea

Next we made our ascent up the mountain, and Abdu Rahman began to pick small bunches of herbs along the way. He said that’s what they use for green tea, and he’d make some during lunch. We smelled the green bunches he’d picked. The refreshing smell, similar to thyme, made us look forward to the herbal tea coming up! 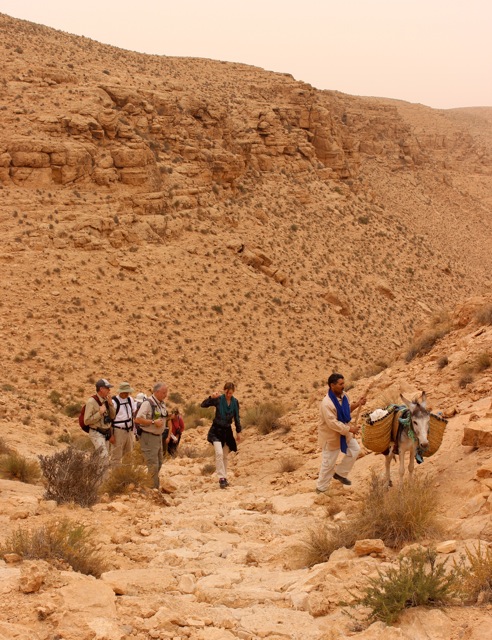 A Hike To Remember: A Traditional Tunisian Meal

After several switchbacks and a final steep climb, we reached the top of the Dhahar plateau where the view got even better, as we could see for miles around. Our stop for lunch was at one of the olive fields on the plateau. We helped gather enough wood to make a small fire, and then Abdu Rahman started on the one pot meal – a spicy sauce with fresh vegetables, meat, and pasta. He also made traditional bread, followed by the promised herbal tea. It was fascinating to see Abdu make the hot meal, and it really hit the spot! 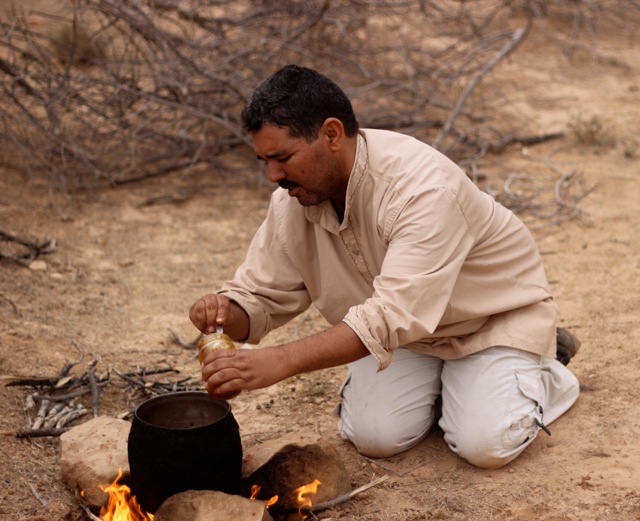 A Hike To Remember: Entering Douiret

Packed with energy, we made the final stretch to Douiret. We could see the characteristic cave homes from a distance. As we approached, Abdu Rahman told us that only 2 families remain in the village. Unlike Chenini, most of the residents of Douiret could no longer make a living so they had to settle elsewhere. Fortunately, a local NGO has been established to preserve the village and its history, and a traditional style hotel has been built to attract visitors. 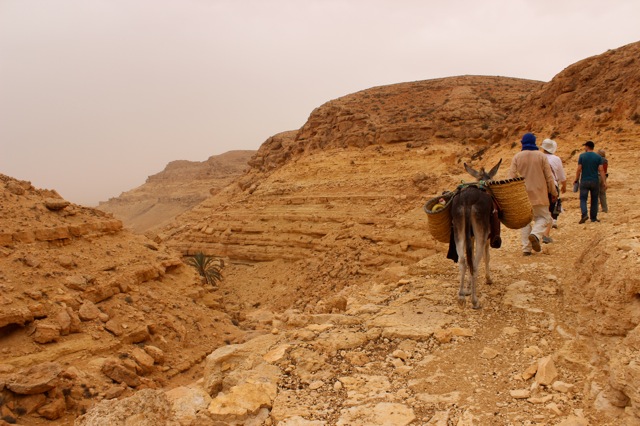 A Hike To Remember: Reflecting on the Tour

As we said goodbye to Abdu, I was struck by how much I had seen and learned about Berber life during the hike. There was something dynamic about walking through the hills, getting to know Abdu, and discovering the Berber way of life through the various stops.

Since then, I’ve been thinking about how nature experiences can be a great way to engage a culture, how to do that in my own life in Tunisia, and how we can do that more on our tours. What are your experiences discovering a country and culture through nature? Please comment or shoot me an email to dialogue about it!

Get A Tour Quote Today
Planning a trip to Tunisia? At Engaging Cultures Travel, we're passionate about introducing travelers to the country we love. Fill in our custom tour form and get a free quote for a Tunisia itinerary perfectly tailored to your interests and needs.
Get A Tour Quote Today
Austin Hand2019-08-15T13:39:13+00:00