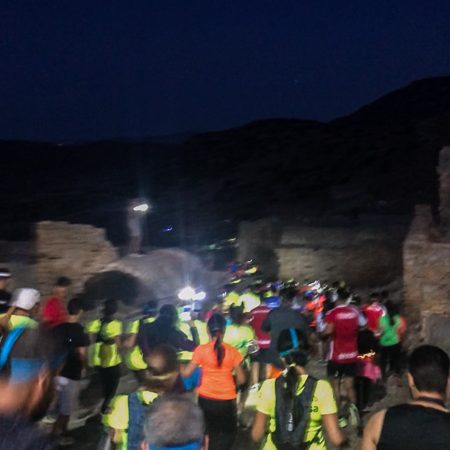 Runners of the Zriba Night Trail race head out of the village just after crossing the start/finish line.

On July 20th, more than 700 runners from all over Tunisia, including my wife and I, gathered in the ruins of a Berber village, Zriba Al Alia, for the start of the 17-kilometer Zriba Night Trail. As the sun set behind Zaghouan Mountain, we lined up behind the start. Adjusting our headlamps we tried to ignore the scent of couscous wafting up from the restaurant —  our post-race recovery meal awaited!

Destination races have become a popular form of tourism around the world, particularly in big cities like New York, Paris and Sydney. But participating in a race in a lesser-known location, like Zriba, provides unique opportunities to gain a deeper understanding of Tunisian culture, enjoy the scenery and connect with the local running community.

The Pre-Race Pump Up Jam — With a Tunisian Twist

At the start of a race in the U.S., you might hear Queen or Journey blaring in the loudspeakers. In Zriba, runners arriving early to pick up their bibs and vouchers for post-race couscous were treated to a performance by a traditional Tunisian musical group. Men dressed in long white robes with red vests and hats played the zukra and darbouka, and a man demonstrated his incredible ability to balance many clay jars on his head. Performances like this are common at Tunisian events like weddings and cultural celebrations. Some runners climbed onto the walls around the courtyard of the Dar Zriba restaurant to get a better view of the performance, while others explored the ruined Berber dwellings tucked between the rocks.

The path leading out of the Berber village of Zriba al Alya takes runners down the mountain and into the neighboring valley.

Races also provide a unique way to experience a location, whether the race takes place in a city or in nature. The Zriba Night Trail, as the name implies, takes place at night —  a blessing considering that daytime temperatures in July in Zriba can reach 104 degrees Fahrenheit (40 degrees Celsius) — so the landscape is fairly monochrome. But the spectacle above us was the real reward. Far from the city lights, the sky was filled with stars all the way to the horizon (I’d describe it as breathtaking, if we hadn’t already been quite breathless from the steep climb!).

Zriba al Alya is positioned between two mountains in the foothills of Zaghouan Mountain.

Races bring people of all backgrounds together in the name of well-being, competition and camaraderie. At the Zriba Night Run — which organizers promoted with the tagline “Night, Nature and Heritage” — tour buses brought running groups from around the country, sporting matching jerseys, and accompanied by a surprising number of supporters. There were even runners from neighboring North African countries. The top finishers received gift certificates from a local sporting goods store, and the event was sponsored by several local organizations and businesses. After the race, we and all the other runners stuck around to share couscous and enjoy the ambience.

Races provide a unique glimpse into Tunisian life and culture that the average tourist may never see.  If you are a runner looking for a unique opportunity to go deeper in Tunisia, check out some upcoming races below. Interested in seeing other parts of Tunisia? We can craft an itinerary around your race experience.

Get A Tour Quote Today

Planning a Trip to Tunisia?

At Engaging Cultures Travel, we're passionate about introducing travelers to the country we love. Fill in our custom tour form and get a free quote for a Tunisia itinerary perfectly tailored to your interests and needs.
Get A Tour Quote Today
Jonathan Sommerville2019-09-12T10:01:54+00:00

About the Author: Jonathan Sommerville

Living in Tunisia has taught Jonathan that each day has new lessons to be learned but the adventure is half of the fun. He enjoys helping other cultural adventurers take their travels to the next level as they continue to learn with each new experience.